More than 50 people stood on the lawn of the Kane County Courthouse in downtown Geneva at noon Thursday, with their heads bowed, clasping blue-and-silver pinwheel toys.

They were remembering, in a moment of silence, the victims of child abuse and neglect — “especially those that are still hiding,” said Gloria Kelley, executive director of Court-Appointed Special Advocates of Kane County. CASA’s annual “Hands Around the Courthouse” ceremony closed out observation of National Child Abuse Prevention Month (https://www.childwelfare.gov/topics/preventing/preventionmonth/). The color of the pinwheels hearkens to the blue ribbon a Virginia grandmother placed on her car’s radio antenna in 1989, to memorialize the death of her grandson, in the first observation, Kelley said. “Every child has the right to be treated with dignity and respect,” she said. CASA volunteers are guardian ad litems appointed by judges to advocate for the interests of victims in criminal cases of abuse and neglect, and in civil guardianship cases (such as when a relative petitions to become guardian of children). Kelly said about 150,000 reports of suspected neglect or abuse had been called in to the Illinois Department of Children and Family Services’ tip line as of the end of March. About 250,000 reports were called in during all of 2020. “And that’s good. Because when people see something, they are saying something,” Kelley said. She suspects two reasons for the increase. The first is children are attending school in person, so mandated abuse reporters such as teachers are seeing them again. The other is the public’s increased interest in the wake of the death of AJ Freund of Crystal Lake. AJ died in 2019 as a result of abuse and neglect by his parents. There was much attention, first as the parents first reported him missing and later when they were charged and the details of the abuse came out. Kelley said CASA Kane County is currently looking out for 428 children in the criminal cases. But it has stopped taking on guardianship cases, because it does not have enough volunteers. You don’t have to be a lawyer to be a CASA volunteer. For info in other suburban counties, and nationwide, visit nationalcasagal.org. 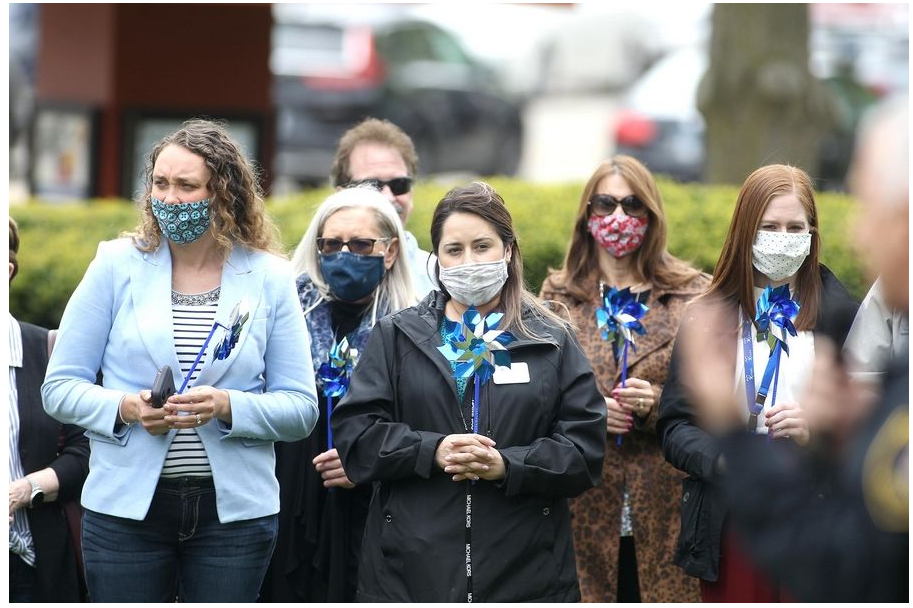 CASA Kane County Executive Director Gloria Kelley addresses attendees of the organization’s “Hands Around the Courthouse” observance Thursday in Geneva. “Every child has the right to be treated with dignity and respect,” Kelley said. – Sandy Bressner/Shaw Media